Gift wrapping is an art. Unfortunately, it’s one I suck at. I’m a gift-wrapping philistine. Every time I have to wrap something, my heart sinks.

We were having our Christmas party for work last Friday evening and as part of the festivities, there was going to be a White Elephant gift exchange. I actually went and got my gift the evening before, which is considered well in advance for me. (It’s not unknown for me to stop by a store to buy a gift on my way to a party.)

Anyway, Thursday night around 11:30 pm, right before bed, it occurred to me I still needed to wrap the gift. There was a moment of panic when the wrapping paper wasn’t where I’d last remembered it. Was I out? (Don’t ask me why I didn’t check earlier whether I still had wrapping paper available from last year — I just assumed I did.) Helpfully, the Houseguest remembered she’d spotted three rolls of it in the corner of her walk-in closet, so I hauled them out.

You would think after all these years, I would be a master at wrapping presents, but I’m not. I’m pretty sure a 5-year old could do a better job.

Don’t believe me? Here’s a Christmas gift I tried to wrap for a Secret Santa exchange we had at work in 2016.

Actually, I do appreciate a well-wrapped gift. It’s an art — and one I wish I could excel at. My dad’s kung fu was strong when it came to wrapping gifts and he was probably even better at it than my mom who was no slouch. Maybe it was his military background? He had to learn to do things with precision when he joined the Air Force back in the 50s. When he retired, he still rolled his socks neatly military-style and when he made a bed, the sheets were taut and had hospital corners. (My bed-making skills? Well, best not to talk about it.) No one could square away a pantry or laundry closet like him. Me? Not so much. It always looks like I tried to straighten up during an earthquake. I’m just an agent of chaos.

Not surprisingly, when it comes time to wrap a gift, I get the same feeling of impending doom I used to get when my teacher asked me to solve an algebra problem back in high school. However, I always launch into it with the best of intentions. In my head, my wrapping job turns out perfectly. Nice crisp edges. Accurate, straight cuts. Discreet tape work. I’ve even glanced at online gift-wrapping guides in an effort to improve. But reality always lets me down. It doesn’t matter the effort — my execution always falls far short.

A few times, I’ve resorted to using a gift bag instead of wrapping my present (usually because I’m buying the gift on the way to the party), but to me, it feels like I’m cheating and not putting in the effort. So I decided the night before the party I’d try again and give the gift wrapping a yeoman’s effort. This time, I would take my time and measure and cut the paper carefully, fold neatly, and tape with precision. I was bound and determined not to end up with a jacked-up looking gift this year. With great purpose, I set about gathering my materials — I was about to perform my best wrapping job ever.

Immediately, I ran into problems. The first roll of wrapping paper ran out as I unrolled it. I had bought a cheap gift that came in a bulky box, but it looked like I had just enough paper left — until I tried to tape it up.

So I got out the second roll of paper and tried again but it was at the end of the roll too. 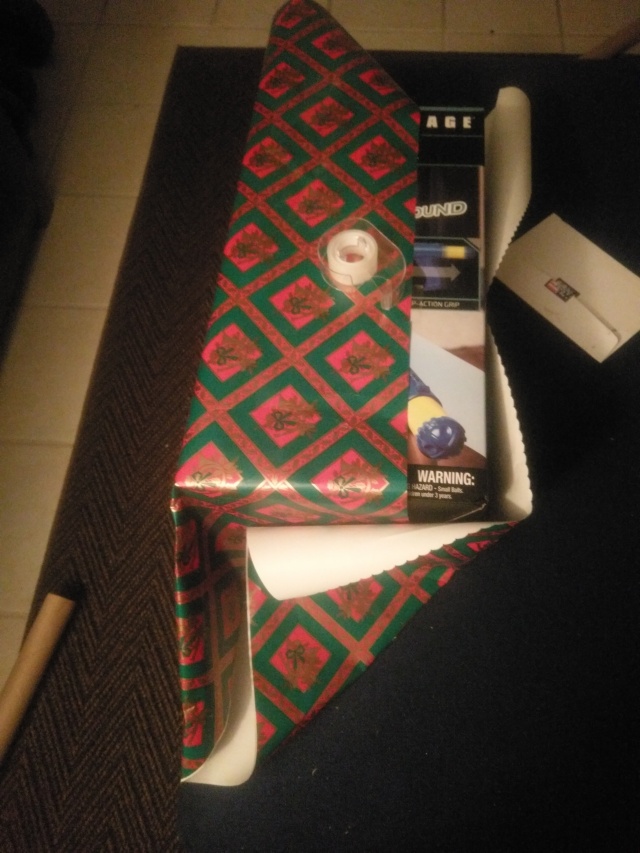 In fact, there was even less paper to work with.

And the last roll had the least amount of paper of them all. Shit, what was I going to do?

Yes, I improvised and used both rolls. Is it ugly? I prefer the term artistic in a modern art sense.

Whatever. The ultimate take away should be I got the damned thing wrapped. Right?

Besides, there’s always next year. Gives me plenty of time to watch Youtube videos and practice.

Enjoyed this post? Check out these holiday-themed posts from last year: A Starbucks Holiday Tale of Woe  and  Christmas Cheer — or Not

8 thoughts on “The Lost Art of Gift Wrapping”