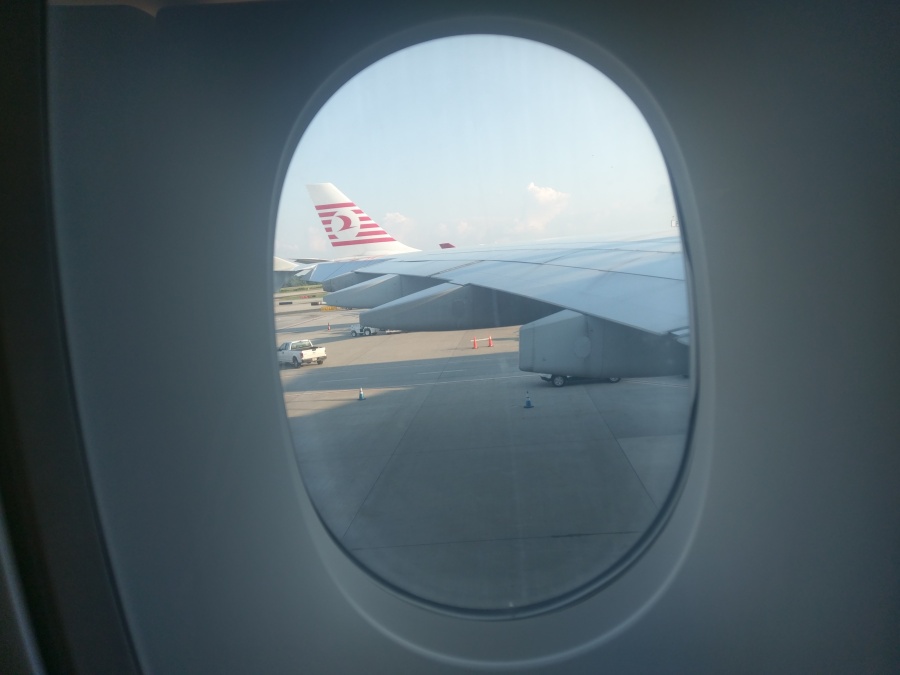 So, just landed in Paris.

I arrived in Atlanta just before my connecting flight was set to depart thanks to Delta being unable to determine how many carry-ons actually fit in the overhead bins of their airplanes. And no one was willing to voluntarily separate from their bag. I guess I don’t blame them. (Okay part of me does.)

Things were looking grim for the Land Manatee as I’d been told it would be the next day before I could get out if I missed my connection. But I was directed to a landline phone to speak with the Delta team that handles passengers with interrupted travel and spoke with Toby. Took him a while but he found one option: shipping me to Paris where I’d sit around for 4 hours and then arrive in Manchester 6-hours later than planned. We’ll, better than spending 24-hours hanging around Atlanta. So, 2 hours later I was on a giant Airbus on my way to France.

Toby did annoy me when after getting me situated, he read off the obligatory script that my ticket was still nonrefundable and I would have to pay fees for changes. (“Other than the ones you just forced on me?” I wanted to say.) But I knew Delta made him say it so I bit my tongue. I asked him about getting the money back I’d spent to get an exit row seat (I hate people leaning their seats back into me or being trapped in a window seat by sleeping people when I have to use the toilet.) Toby said his computer didn’t show I’d paid for the seat. Well, it’s on my credit card, so I’ll deal with that later.

Even though the flight was full, surprisingly, I got a window seat and was joined by an older couple who didn’t say a word to me the whole flight till the end (they were actually nice). I did need to use the restroom at one point but they were watching movies and I figured it wouldn’t be long till they had to go, being older and all. I swear to God, I think they must have beachballs for bladders. Things were entering critical territory when the hubby had to stretch his legs.

Speaking of seatmates, just out of curiosity, why in all my years have I never sat next to an attractive single woman who is a pleasant conversationalist? I mean, I’m a bit long in the tooth for that now, but statistically, you’d think it would have happened at least once. I know it happens – I know someone who got married to the person they met. I guess technically it did happen to me once, but I was 12 and separated from my family on the flight. She must have been in her early 20s and was in the window seat. I was in the middle. The creeper relentlessly hitting on her was probably in his mid-40s and sat on the aisle, but that didn’t deter him. It was like I was invisible as he spoke suggestively to her. I think I was more uncomfortable than her. She tried to fend him off by talking to me the whole flight, not that I was a brilliant conversationalist, being 12 and all — I just happened to be the better option.

Actually, now that think about it, last time I flew to the UK, I was sitting on the aisle across from a family except for the dad who was behind me. Being the noble fellow that I am, I offered to trade with him so he could talk to them and he gratefully accepted. Immediately after, two attractive women took the seats next to him. To add insult to injury, he ignored his family to talk to the ladies. And then he leaned his seat all the back into my legs. There should be a special place in hell for him.

Anyway, going to try for some shuteye. Just realized the damned window seat is too far away from the wall to lean against it — at least a foot. Man, that is annoying.

Okay, trying to sleep was miserable. The bastard who designed these seats must hate people. In the terminal now. At least I’m not the only lost looking Yank. My two years of college French are a waste because I haven’t had an opportunity to ask for a croque monsieur or a biere Allemande. (I really should have paid attention beyond sandwiches and beer). I think I’m supposed to get on this train. Wish me luck.

Okay, train worked out and I’m at the right concourse and not in Luxembourg. Have some time to kill. Hopefully, I don’t miss an important message because it’s in French followed by heavily accented English.

My phone is running low on juice. Was going to plug it in. I have a bunch of adapters but none looks quite right, so rather than gambling (we’ve seen how that’s been going) and blowing up my phone, I think I’ll give it a miss and just turn it off to conserve juice.

My data is super slow so I doubt any photos will upload. Have to fix that later.

I Hate Traveling. But My Bag Doesn’t.