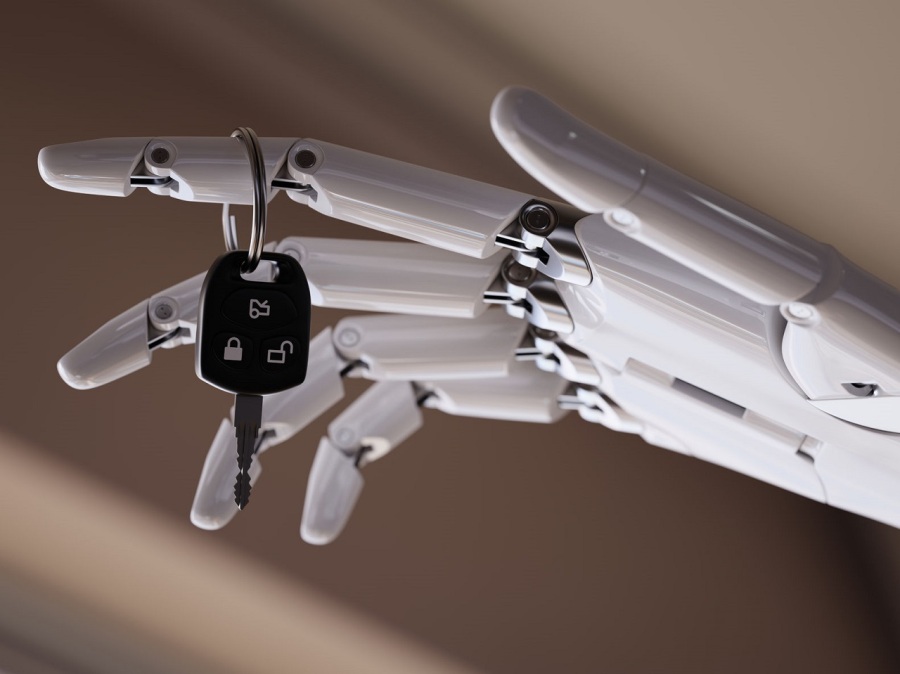 Not to alarm you, but I see robots.

And I’ve got bad news: they might have their beady sensors on your job. I know they’ve already got designs on mine — well, at least on one of them.

Yes, my side gig as an Uber driver might not be around after a few more years. I don’t know if you’ve spotted a driverless Uber car in your city, yet, but I frequently cross paths with them as Uber engineers test them on the road. An Uber exec told me back in November that they were buying a large fleet, and in fact, Uber recently signed a deal for 24,000 driverless Volvos.

To be honest, the thought of driverless cars kind of unnerves me. The majority of my passengers who talk to me about it are either hostile to it or ambivalent. Not that I think driverless cars are going to go all Skynet on us and start using humans as speed bumps ala Death Race 2000, but how are they going to overcome glitchy navigation or worse, bad human drivers? In fact, an Uber driverless car got into a wreck in Tempe last March when a driver T-boned it in rush hour traffic. In fairness, it wasn’t the driverless car’s fault and software engineers are working diligently to create predictive software that can better anticipate the illogical actions of careless human drivers. But I still might not be an early adopter on this one.

All hail the Robot King

Are you thinking what I’m thinking?

No, no, it’s not that kind of a revolution. You don’t have to worry about blood and chaos in the streets as our robot overlords send their mindless minions to start enslaving or exterminating mankind (well, not just yet anyway, though Stephen Hawking has a few dire words of warning on the matter). No, the revolution we’re undergoing involves increasingly automating our world to make our lives easier, more productive — and more profitable (well, for corporations, anyway) — which could come back to bite the average person in the ass — but more on that in a bit.

So how machine dependent are we?

In an increasingly automated world, how machine dependent have we become? Well, more than you might think. Factories have been chockful of them for a while, and now they’re making inroads into our daily lives. Odds are someone you know has got a Roomba-style robot vacuuming their house (or giving their cat a ride for a meme). And the Chinese have built a robot that will save you the trouble of masturbating when donating sperm (I image someone somewhere is feverishly working to build a cheap knockoff to, uh, penetrate a secondary market). So, yeah, we’re getting pretty damn dependent.

Of course, automation starts losing its shine when it starts impacting your livelihood. Oh, at first it seems great when machines start eliminating repetitive tasks from your day — until your company automates you out of a job.

Automation makes perfect sense from a business standpoint. For example, let’s say that originally Bob made $35 an hour putting widgets into a machine until some enterprising American businessman decided he could pay Ming $2.5 an hour if the company off-shored the job to China. It was a no-brainer. But as the quality of life has risen in low-cost countries, so has the price of labor causing companies to look for new less-expensive countries to move to like a bunch of profit hunting nomads.

The solution? Why pay anyone anything when you can install a robotic worker and have it do the same job 24/7, year in and year out? Not only does it do the job more efficiently than a human, it does it without joining a union. It won’t be demanding coffee breaks, health benefits, and a retirement plan. And instead of thousands of workers, you only need a small caretaker workforce to oversee operations and handle maintenance issues. Plus, with a robot, you don’t have to worry about shoddy work or compliance issues. With the exception of I Robot and Westworld, robots aren’t big rule breakers. A robot won’t take kickbacks, expense a trip to a strip club, or get you sued because it’s pinching butts in the break room or exchanging raises and cushy job assignments for sexual favors.

That’s why President Trump’s campaign promise to bring jobs back to the U.S. rings hollow. Those jobs will eventually come back, but when they do, they’ll be going to a robot and not an unemployed blue-collar worker in the Rust Belt. (And to add insult to injury, I bet the robot is initially built overseas.)

‘Hang on,’ you’re thinking. ‘A robot’s not replacing me.’ Maybe not right away. After all, machines can’t replace every job (yet), particularly highly intellectual or creative positions. Plus, the higher up the corporate food chain you are, the more secure your position. However, if you’re a mid-level manager and you have no one left to manage…

You see where I’m going with this.

Picking up their last paycheck

Back in the 1950s, assembly line workers in the auto industry never anticipated being replaced. However, by the late 60s, robots started showing up and by the 1980s, automation was in full swing. But now it’s not just manufacturing jobs that are becoming robotized. The human workforce is under siege. And if you’re in the wrong industry or have few marketable skills, a robot is coming to steal your job. And sooner rather than later. (Think it hasn’t happened before? Anyone remember the Luddites?)

Here are a few of the many professions potentially on the chopping block:

Long haul truckers. Companies are already testing automated big rigs, so long-haul truck drivers’ days are numbered. Self-driving trucks don’t need breaks and won’t be driving tired or dangerously while trying to stay on schedule. I guess that means say goodbye to Ice Road Truckers and hello to Ice Road Robots, which I suspect will be a bit more boring with lots less swearing.

Garbage truck driver. In a similar vein, how long before driverless garbage trucks make their appearance? Waste management companies have already replaced the guys who threw the garbage into the truck with a mechanical arm. Seems like going fully automated is right around the corner.

Fastfood & grocery store workers. Also in the crosshairs are fast-food workers and grocery store employees. Amazon is about to disrupt things with its automated grocery store. And I was just in a McDonald’s where they’ve introduced new ordering kiosks in the lobby. You no longer interact with an employee who might screw your order up. Instead, you use the touchscreen to place your order and they bring your food out to you. At some point, robotic cooks will be frying up your order and you’ll pick it up at the counter. It makes sense. The robot cook will prepare the food consistently. And you never have to worry about it causing an ecoli outbreak because it didn’t wash its hands after taking a dump.

Baseball umpires. Okay, this one is a bit more of a stretch (for now), but Major League Baseball umps have been feeling the heat for their variable strike zones for a while. Former D-Backs manager Bob Brenly has been advocating for years to have an automated system take over the behind-the-plate duties. Naturally, the umpires union isn’t happy about that. Of course, I wouldn’t be happy either — have you seen how much a professional umpire makes? It would probably require the development of sophisticated AI to completely replace humans, but hey Ump, strike one!

Bartenders. Also on notice are bartenders. While we barflies might miss the helpful advice from a human bartender to forego drunk calling our ex, automation will have benefits. Patrons with annoyingly obscure drink requests will be unable to stump Robby the Robo-bartender and delay service during peak hours. Plus, bars will save money on wages, wasteful over pouring, and unauthorized comped drinks.

Prostitutes. Even the world’s oldest profession is under threat from robo-bordellos as enterprising brothel owners are looking to replace human sex workers with robotic prostitutes. Kind of creepy, but it’s one small way of attacking the scourge of human trafficking. In fact, the first robot house of prostitution opened recently in Spain, though the local prostitutes aren’t taking the competition lying down.

Robot Repair Technician. What, you thought there’d be job security fixing robots? This future job is already in the crosshairs. I hate to tell you, but robots will eventually be repairing robots.

Writers (!). Distressingly, robots have even started writing news stories and putting some underpaid writers out of work. (Okay, when will this madness stop!)

Basically, this is just the tip of the iceberg.

What next, indeed. I posed this very question to a tech consultant when I drove him out to Waddell in my capacity as an Uber driver.

His belief was that workers would adapt and move to new jobs. However, I wanted to know what people who worked low-skill jobs, like fast food workers would do? Let’s face it, for the majority of those working fast food, they probably took the job because of limited employment options in the first place. And it’s not just low-level jobs that are disappearing. What then?

There is the potential for massive economic chaos as a large part of the workforce is made redundant. Think back to the Great Depression where at its height only 25 percent of the labor force was unemployed. The Robo Depression could be far more extreme if not planned for. If 50 percent of people are unemployable because there aren’t any jobs, who will be buying products that fuel the economy? Are we looking at a new paradise free of tedious jobs or an extreme economic collapse?

Trust me, economic gurus are debating this and trying to figure out how we’re going to have to reinvent economics.

Let’s assume that the global economy doesn’t collapse. Experts have long debated a time when we may have a population that is paid not to do anything because machines are busily picking up the slack, but now this is actually entering the realm of serious discussion. What that future would look like is anybody’s guess. Would it be a paradise of leisure and culture? Or would it be a boring life where a corporate elite have the world’s wealth and the rest of us have just enough to get by, eking out a grey, boring life? If you were so inclined, would you be able to get a fulfilling job with a chance to pull yourself up to a higher stratum?

All food for thought, my friends. But regardless, the fact is the Robot Revolution is starting to pick up steam. In the end, I just hope that the Robot King has the Tin Man’s big heart.