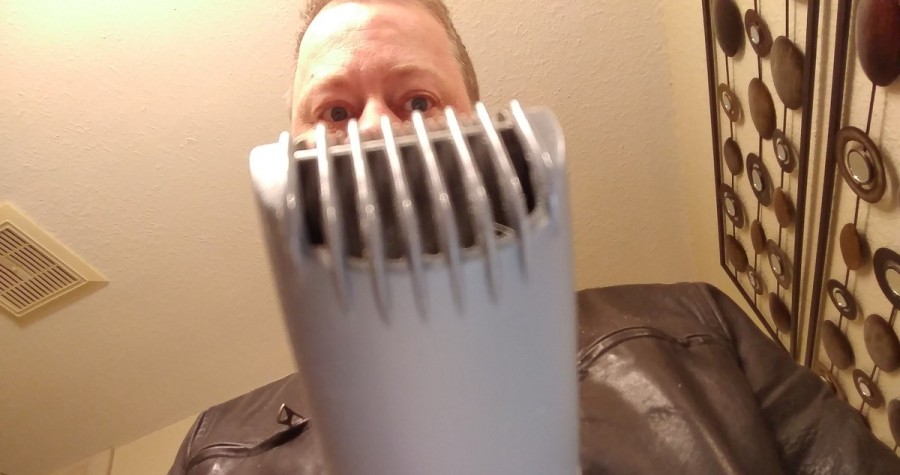 Recently, I visited fellow blogger Cecilia Kennedy’s DIY blog Fixin’ Leaks and Leeks and read her post about how her vegetable spiralizer died and how her hubby, Nate, started to take it apart to fix it. At that point, alarm bells went off. Now, I don’t know Nate, but I’ve grown fond of him from her posts and didn’t want anything bad to happen to him. In my head, I screamed ‘Noooooooooooooooooo!!! Nate, don’t do it!’

Because I too took an electronic device apart. Once.

My tale starts a long time ago, in an apartment far, far away with a recalcitrant beard trimmer that wouldn’t hold a charge…

Growing up, I never envisioned a day where I would need a beard trimmer. Beards were relics of the Civil War (or Woodstock) and not cool. Only engineers, the down-and-out, arch villains, and hold-over hippies wore beards.

Once I got to college, my attitude about beards began to shift. Probably the biggest reason for my change of heart about beards was I could finally grow one. Plus, styles had changed too. Anyway, when I grew my first beard, it soon became apparent I’d need to buy a beard trimmer because the airline I worked at as a reservation agent demanded a well-groomed appearance (this was about 20 years before massive, gnarly hipster beards would become socially acceptable). So I bought a beard trimmer at Target. And things were good. Until one day the trimmer’s rechargeable battery flatlined and wouldn’t hold a charge anymore.

This caused me a bit of consternation. First off, the trimmer wasn’t that old. And second, how does a rechargeable battery lose its ability to hold a charge? Last time I’d checked, that was its whole raison d’être. Grumbling, I considered that I might have a defective trimmer. Or maybe a defective battery? Either way, I found it all very annoying.

Regardless of the cause of the problem, I still had to be able to trim my beard. The airline barely paid me enough to live on so I didn’t relish an unneeded expense if I had to replace my defunct beard trimmer. As I examined it, all wasn’t lost. It had a battery hatch. Maybe I could swap in a new rechargeable battery and see if that fixed the problem?

Beginning my career as a handyman

Retrieving the trimmer’s manual, I looked up what kind of rechargeable battery it used, bought one, and went to install it — and ran into immediate trouble. When I popped open the narrow battery hatch, the old battery was too big to fit through it. What the hell? How was I supposed to get it out and put the new one in? I examined the problem from all angles (well, actually just one), but no matter what I did, I came to the same conclusion. To get the bigger battery through the smaller slot would defy the laws of physics.

I became infuriated. What kind of incompetent engineer comes up with such a boneheaded design? With all the indignation a 23-year-old can muster, it was obvious to me what was going on. The greedy manufacturer had purposely built the hatch to be too small as a way to force me to buy a new trimmer.

Not happening! They were trying to throw up a roadblock, but no way were they going to defeat me.

Now, I’m not particularly handy, and I didn’t have any tools at my townhouse, but I found a screwdriver in my car’s emergency kit and set to work disassembling my beard trimmer. Taking out the screws, I carefully split the two halves of the trimmer apart and looked at its electronic guts and the wires connecting the battery to its other internals.

And that gave me a moment of serious pause.

Call me whatever disparaging names you want because I don’t care and will freely admit it — I fear electricity in all of its forms. Whether it’s distant lightning crashing down from the heavens, frayed wires, or static electricity (okay, that last one is more of an intense dislike), I want nothing to do with electricity. Don’t get me wrong, I want all the conveniences it provides in our modern world, but I just want to pretend it all happens by magic when I flip a switch or press a button. Paying my power bill is the maximum extent of involvement I want when it comes to the technical side of electricity.

My apprehension, I suppose, originates from when I was around four years old. This was before the days of childproofing your house. The philosophy back then was more along the lines of ‘Good luck, kid.’ Parents, in general, relied on their eagle-eyed vigilance, good fortune, and hardy genes to keep their offspring alive. But accidents were inevitable. As a kid, whatever didn’t kill you became a learning experience preparing you for life and I racked up a lot of them. So this particular time, I became fascinated with the wall outlets. And wouldn’t you know it, my little thumb fit right in where the plug prong went…

Yeah, needless to say, that didn’t end well at all.

Anyway, I learned one very important and painful lesson that day: Electricity bad. A lesson I have carried with me like a massive scar on my psyche from that day forward.

Fear of a broken beard trimmer

As I stared at the partially disassembled trimmer, I began to lose my nerve. My hands got fidgety. You would have thought I was trying to disarm a bomb after drinking a triple espresso. I almost decided to call off the whole operation and just buy a new trimmer.

I chided myself for my momentary weakness. That’s what the greedy corporate bastards wanted — for me to grow discouraged and throw out my beard trimmer and buy a new one.

Well, they’d underestimated Sean D. Layton. There was no way that this manufacturer was going to buffalo me into buying a new beard trimmer. I knew a scam when I saw one and refused to be victimized. No longer would I contribute to this disposable society. There comes a time when every person has to make a stand, and I was making mine.

Get a grip, Layton and stop being a wuss. The damned thing is not plugged in.

Taking a deep breath, I reached in and grabbed the battery. It had a piece of metallic tape-like film covering the connections. I seized it to peel it from the battery and…

I’m still not sure what happened next other than it happened so fast. The only thing I know for certain is…

…an ungodly surge of painful man-made lightning seared through my thumb and sent me jumping and yipping like a startled dog. The pieces of beard trimmer went flying one way to clatter on the linoleum kitchen floor, and I went hopping the opposite direction. Cursing like a sailor, I retreated quickly to the living room.

When I looked at my throbbing thumb, the electric shock had burned a huge blister onto it (which caused my thumbprint to disappear for a while).

After an hour or so, I got up enough nerve to go back into the kitchen. Taking a magazine, I used it to gingerly scoop up the scattered parts of the trimmer. Then I took it outside, heaved the whole lot into the dumpster and went up to Walmart and bought a new beard trimmer. One without a battery hatch. I was back as a full-fledged member of the disposable society.

That happened roughly thirty years ago, but the lesson stayed with me. So when my electric pencil sharpener stopped sharpening pencils last week, I had a decision to make. I could hear it humming but it wouldn’t turn. It had been my mom’s, not that she had a sentimental attachment to it, but I kind of did. For a split second I thought about disassembling it, to see what was wrong, because if Nate could do it, I could do it. Right? But then, ashamed of myself, I threw it away and bought another one.

Check out Cecilia’s website for a dose of her quirky humor as she attacks DIY and craft projects with zest with the “willing” help of her charming family.

19 thoughts on “How (Not) to Fix a Broken Beard Trimmer”