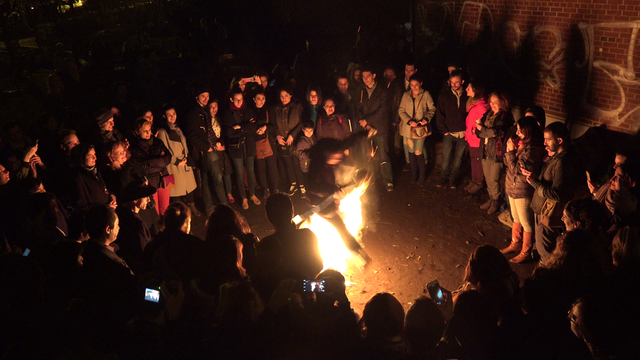 So the Persian New Year known as Nowruz is almost here. Are you excited? Yeah, I didn’t have it on my calendar either, but the Houseguest brought it to my attention because she’s half Parsi, and she asked me to help her mark it with a simple fire ceremony. It was going to involve open flames in my living room, so knowing my bad luck and figuring there was a fifty-fifty chance I’d burn my house down, I was rather reluctant, but I finally agreed.

If you’re not familiar with Parsis, they are Persians who practice Zoroastrianism the former state religion of ancient Persia (modern-day Iran). Their ancestors immigrated to India between the 8th and 10th centuries to escape persecution and preserve their faith after invading Arab Muslims put a beatdown on the weakened Sassanian Empire in 651 A.D. (By the way, Parsi means Persian. Farsi, the primary language in Iran, is the Arabization of the word Parsi).

For those of you who aren’t up on your ancient religions, here’s the short version of Zoroastrian belief: You have a supreme deity, Ahura Mazda, the lord of light, who opposes the destructive Angra Mainyu. That cosmic gangster has a fearsome minion who will terrorize the world during the final winter. Luckily, there will be a savior born of a virgin arriving to raise the dead and judge mankind, sending the evildoers to hell and…

Man, is it me or does this sound vaguely familiar?

Anyway, Zoroastrianism is known to have influenced Judaism (after the Persians freed the Jews from their Babylonian captivity), Christianity, and George R. R. Martin.

Interestingly, Parsis are big into the purifying nature of fire and worship in fire temples.

Light it up, baby!

After I invited the Houseguest to accompany me to Baskin Robbins, we were eating ice cream, and she told me she was going to perform a small ritual for the fire festival of Chaharshanbe Suri, which involves jumping over a bonfire. It symbolizes renewal, and she thought I should join in.

Back at the house, I asked what we were going to do about the lack of a bonfire, and she replied it didn’t matter, a candle would suffice. So she asked me where I kept my candles. I told her I didn’t have any. She was convinced I had candles stored somewhere because everyone has candles. I assured her I was an exception to the rule.

“How can you not have any candles in your house?”

“Because I’m a dude. What do I need candles for? Have you ever seen me light one?”

“If you don’t have any candles, what happens during a power outage?”

“I sit in the dark until it comes back on and hope the North Koreans didn’t nuke the electrical grid with an EMP.”

Luckily, she remembered she had some birthday cake style candles in a box. Taking four, she stood them up in a small tub of gravel (my idea) in a bowl. Then she asked me for a lighter or matches, and I told her she could look around, but I didn’t remember having any.

“Are you kidding me?”

I wasn’t. Why would I need them? To light my non-existent candles?

Again, fortune smiled on her as she found one of my dad’s old Bic cigarette lighters after rooting around in a drawer. I was dubious it would fire up since it had been sitting unused in a drawer for the last six years. But it ignited when I flicked it, and we had fire. I successfully lit two candles before things got a bit hot, so I snuffed the flame out and then immediately tried to relight the lighter and burned my thumb quite painfully on hot metal.

Looking at my slightly blistered thumb, I wondered if it counted as a sacrifice. While I was applying ice to the burn, the Houseguest took over candle-lighting duty, but she had trouble getting the lighter to spark. Consequently, she was hilariously inept at it despite my expert instructions.

“Seriously, you can’t light a Bic? What kind of fire worshipper are you?” I said. “I should turn you in at the fire temple.”

Finally, she gave up and used one of the lit candles to get the others burning.

When everything was set up to her satisfaction, she gave me my lines I was supposed to shout as I stepped across the candles. Normally, you leap, but you know, no bonfire, so leaping would be a bit overkill — plus my knee hurt. She opted to recite the saying in Farsi as she stepped across the burning candles:

Which means: “Your red to me. My yellow to you.” Basically, the sense of it is:  Give me your healthy ruddy color and take my sickly paleness.

To Zoroastrians, this ritual symbolizes ridding yourself of old and tired energy and replacing it with an infusion of new and vibrant energy. I pointed out that red flame is actually lower in temperature than yellow, so maybe they had it backwards. She rolled her eyes, which I interpreted as quit being an idiot, and explained red was the color of power in many cultures.

One thing I discovered is it’s not just Zoroastrians who still hold this fire festival. Many modern-day Muslims in various countries in the former Persian Empire, including Iran, still practice the tradition of fire jumping. Think of it like Christians celebrating old cultural holidays that were based on the pagan traditions of their ancestors (like dressing up for Halloween).

She told me to say the lines in English as I stepped across the fire. No reason for me to butcher it in Farsi.

I obediently stepped back and forth across the candles and intoned:

“Oh Lord of Light, I ask you to rain down fiery ruination upon my enemies, to see them driven before me, and to hear the lamentations of the women.”

I couldn’t help myself, and now you have an inkling of why I would get in trouble at church as a kid. The Houseguest was caught between laughter and indignation though I don’t think she picked up that it was a mash-up of my interpretation of Game of Thrones and Conan the  Barbarian.

“That’s not what you’re supposed to say!”

And then she made me go back and do it right.

Anyway, it was interesting, and it’s good to see what other cultures are about. I’m just glad we didn’t have to do any other of the more obscure Zoroastrian rituals, like drinking cow urine.

3 thoughts on “How Not to Burn Your House Down”