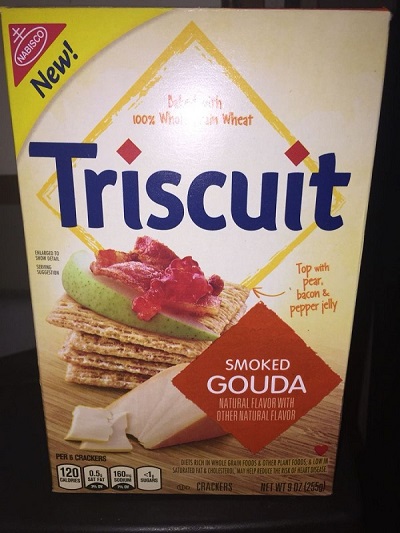 Don’t you just hate when the package design of a food product entices your brain into thinking that the product is going to taste absolutely delicious when in reality it falls far short of your hyped up expectations?

I was out shopping recently and I was in the cracker aisle. Now, Triscuits form a heavy part of my diet and I needed to replenish my depleted stock, so I went up to Fry’s to do some grocery shopping. (Let’s not go picking apart my lazy and inadequate dietary habits. We all know I shouldn’t try to meet my nutritional needs with a cracker-based diet — just roll with me here.)

Anyway, it’s not uncommon for me to buy four or five boxes of Triscuits at a time and then munch on them throughout the day as a snack — I even have them stashed in my desk at work. Occasionally, I’ll even plan a mid-day meal around Triscuits and a couple of slices of Pepper Jack cheese though I’ll sometimes throw some veggies or a Granny Smith apple onto the plate (if the Houseguest isn’t misappropriating them) because the government Food Pyramid says I should.

When you don’t stick to the plan

Usually, I get the Original Triscuits or the Rosemary and Olive Oil ones. That’s it. Nabisco has introduced a number of exotic flavors, but I like to keep it simple. I did get adventurous once and buy the Dill & Sea Salt & Olive flavored ones – I can’t say whether I liked them or not. They were just — odd.[perfectpullquote align=”right” bordertop=”false” cite=”” link=”” color=”” class=”” size=””]I stood there slowly chewing like a ruminating cow, trying to savor the flavor and let it develop.[/perfectpullquote] But as I was shopping this time, I saw Smoked Gouda Triscuits and I was hungry (P.S. never shop when you’re hungry) and for some reason that sounded absolutely delicious. How can you go wrong with a tasty cracker flavored with a tasty cheese? That obviously has to be a winning combo, right? I thought so. So did the lady who rang me up at the register. She waxed enthusiastically about how fantastic the Smoked Gouda Triscuits taste. Sold! She did mention that she loves them even more because her adult daughter who lives with her won’t touch them because she thinks they’re disgusting. Eh, probably a picky eater — which I’m not. So, I bought a box and couldn’t wait to try one, and when I got home, I eagerly tore the package open and popped a Smoked Gouda Triscuit in my mouth.

I stood there slowly chewing like a ruminating cow, trying to savor the flavor and let it develop. As the seconds passed, I was really hoping it would develop into something other than the one occurring in my mouth, which was not good.

It’s got a, er, delicate flavor

So, how to describe the taste? Well, I don’t know what smoked ass tastes like, but if it came in a cracker form, there is a good chance it would probably taste like what I was chewing on. Yeah, I was not a fan. I didn’t want to jump the gun in my assessment so I ate another one. Yep, unfortunately, I was right the first time. I gave one to the Houseguest to try and watched with interest as she nibbled on it. Her nose wrinkled slightly and she glanced at me like I’d done something objectionable. She seemed to be trying to place the taste. When pressed, she said it was okay, but she definitely didn’t want another one.

The weird thing is it tastes like smoked Gouda — kind of. And I love smoked Gouda. And it has the crunch and texture of a Triscuit and, as we’ve established, I love Triscuits. Maybe it was the taste of Gouda combined with the wrong texture that was sabotaging the flavor center of my brain? Whatever it was, my brain was screaming unholy abomination and having none of it.

Maybe I got a bad box? It wouldn’t be the first time I bought something spoiled. Then again, maybe, it’s just me? Because I’ve seen people raving about these Smoked Gouda Triskets online. Maybe it’s an acquired taste? Could be. But I don’t think my taste buds are onboard for that kind of a long-term breaking-in project.

Anyway, I need to go shopping tonight. No more shopping while hungry and no more experimentation with my Triscuit purchases. And in the unlikely event that I ever cross paths with the cashier’s daughter, I’ll have to apologize for labeling her a picky eater.

4 thoughts on “Smoked Gouda Triskets Review: No Thanks!”