Why do I create problems for myself? Life would be so much easier if there wasn’t that little voice giving me bad advice or urging me to be annoying. I know I don’t have to listen to it, but yeah, I kind of do.

So the Houseguest loves cookies. Not as much as my dad (who my siblings and I dubbed the Cookie Monster). But not just any cookies — she’s very particular. Anyway, she got back from the store today and proudly showed me the cookies she had purchased — big, thick, soft cookies. I’m not really a thick, soft cookie fan. Thin soft, okay. Thick soft, nah. The look of them kind of reminded me of these huge baby cookies my cousin Matthew in the U.K. used to slobber all over when he was teething as a toddler — though that biscuit was actually pretty hard. I was eight and tried one and didn’t care for the taste. So, with that memory coming back I wrinkled my nose at her purchase. She dismissed my rejection of her cookies and went on to tell me how delicious they are. She had wanted to get pumpkin and chocolate chip, but the store had sold out of them, so she bought banana and chocolate chip ones instead, which sounded tastier, but I still didn’t fancy them.

But they are cookies. So I finally broke down and asked if I could have one because I had zero cookies in the house and a lackluster cookie is better than no cookie at all. Boy was I wrong in my pre-judgment. Very tasty. In fact, it reminded me of banana bread and I LOVE banana bread (my mom made the best banana bread).

The Houseguest seemed far too smug when I admitted I’d been wrong. Something would have to be done.

Anyway, she left for work and I’d been sitting there working at home all day alone with the container of cookies. And like tiny sirens, they were calling to me all day. But I had resisted their call! It would be rude to gobble down some of her cookies without permission and she’d definitely not mentioned anything about having some. Probably learned her lesson three weeks ago when she told me to help myself to the delicious bread she bought. And I did. And it was delicious, particularly with some Irish butter. And I kept helping myself until one day the Houseguest said: “Hey! What happened to all the bread!?!”

Yes, I felt guilty, but it wasn’t completely my fault. I ate the bread at a reasonable rate. If she had not gone days between slices, everything would have worked out and we’d have consumed comparable amounts. As it was, her failure to eat her bread had now made me look like a greedy bastard, which I resented. I did buy a replacement loaf, and as I toasted up my first slices, I told her if she didn’t eat her share this time, I couldn’t be held responsible.

So, back to the cookie temptation. I had held off all day. Even though I had to go out to the kitchen several times. Just one I thought. It won’t hurt anything. No! I told myself firmly. I wasn’t going to be weak today.

A random thought flitted across my mind and though I smiled at it, I shoved it out. No, that would be too mean. “But better than actually eating all her cookies,” the evil part of me said. And he had a point. So I decided to prank the Houseguest by pretending I ate most of her cookies.

The plan in motion

There was a definite risk pranking her. I imagined what her face would look like if she thought I had eaten most of her cookies. She would be either disbelieving with a hint of betrayal or Persian angry, depending on how her day went. Persian angry would be bad. But life is about taking risks.

First, I grabbed some tinfoil. Then I took some tongs and grabbed most of her cookies and put them on the tinfoil and wrapped them up. Then I hid them in the bread box and left the depleted container of cookies on the counter where she’d left them.

And now all I had to do was wait. She would be home soon. 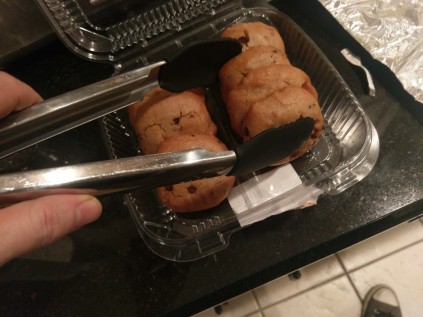 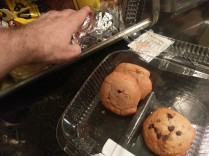 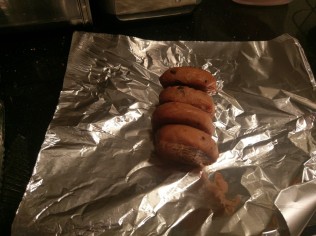 I know, I know, if she punched me, I deserved it. But I couldn’t help it.

An hour passed by. She must have been over visiting a friend.

Then, I heard her in the hallway. She was home! She shuffled by my Mancave in the hallway, grumbling about work. I waited patiently. She engaged me in conversation but wouldn’t go to the kitchen. She lay down on her bed, talking on her phone. Damn!

I could hear her bitching about work — I was definitely playing with fire here. The suspense was killing me! But nothing was happening. Finally, I started playing a video game. At some point, she said something about dinner, but I was trying not to get my tank blown up onscreen so wasn’t really listening.

Suddenly I heard “Hey, I think someone has been at the cookies!” The Houseguest appeared at my door. She was kind of laughing, but it’s that tight laugh where you think they might snap. It was all I could do to play along. I sheepishly apologized, telling her I didn’t know what came over me. She went on for a bit about my gluttony and tried to figure out how many I actually ate.

“I should have known something was up. You looked too happy about something.”

And then she gave me this…

Oh, by the way, that’s the Houseguest on the right side of the photo, trying to jump out of frame so my camera doesn’t steal her soul. The pose kind of reminds me of another mythical creature captured in motion…

P.S. The shot of my living room is kind of dark and the room is messy because I’m still putting new flooring down and have stuff piled everywhere.

28 thoughts on “The Devil Made Me Do It”